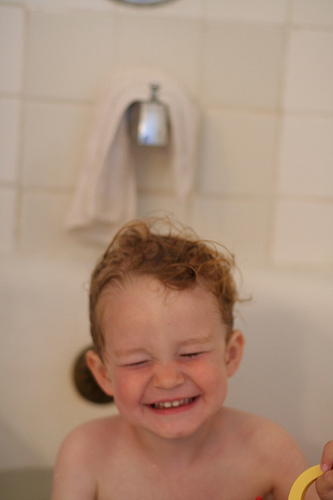 Hank: Wha’s that sound?
Me: That’s the neighbor upstairs.
Hank: Oh! He’s so happy.
Me: Is he? Why is he so happy?
Hank: He love his mama. 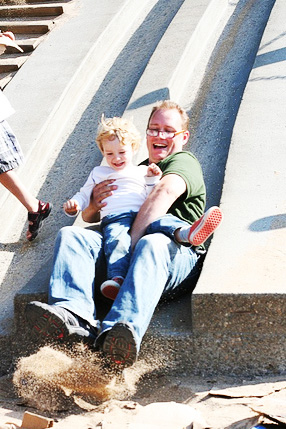 The latest Momversation is about whether it’s cool to be naked in front of your kids. Which it totally is. Except for the chastity belt, I mean.

Excellent reader comment from Miss Tracey Nolan: “I did not grow up in a nakey house. Despite that (because of that?), as a toddler, I used to strip down, sneak out of our apartment and run down the hall yelling ‘I’M FREEEEEE!!!!!.'”

I grew up camping — fresh-picked blackberries and cream, sodas chilling in the creek, bug bites so profuse that I looked infectious. I figured Hank would be a natural outdoorsman.

He was a champ for the five-hour drive, and happy enough through camp set up. I kneeled for a kiss when we’d finished pitching the tent. He took my face in his hands, cocked his little head, and said, “We can go home?”

I figured he’d come around once he’d spent some time in the dirt with all his older cousins, and he did. A little. Unfortunately, he grew increasingly upset when they took occasional bike rides and left him behind. His lip quivered, his eyes welled, “We can go home, pease? Pease?”

We cuddled him. He asked to go home. We tickled him. He suggested we play tickle in the car. We hung him upside down by his feet. He thought that might be more fun if we left and tried it someplace else. Someplace like our apartment. So we pulled out the big guns:

When we were done with the water fight, Hank looked around and gave an unhappy sigh. We scooped him up and took him to the river where he was content to throw rocks for a couple hours. Then his cousin caught a fish. Oh dear. Hank examined the fish, touched it, and said, “Now that fishy go swim again,” and pointed to the water. Uhhh. I distracted him from the concept of death by making high-pitched noises and unattractive goofy faces while we exited the scene, but when he realized we were no longer by the water?

We muddled through the day, but soon it began to dawn on him that there was no way to go inside when it got dark. His face twisted into a mask of such extreme toddler frustration, I’m certain he would have cursed like a sailor in a tattoo parlor if he’d had any expletives at his disposal. Instead he cried for a while, and Bryan cuddled him to sleep in the tent.

The following day was much the same, with a slightly more dramatic bedtime scene. But Hank woke the second morning refreshed. Say! He had a great idea. How about we all get in the truck? From there we could go home! No? What are we doing now? Getting ready to go home, he hoped. Are we going there now? He would enjoy that.

After an hour or two of subtle coercion, Hank asked me to lift him into his car seat, and then simply refused to be moved. His forlorn toddler face said it all:

So instead of staying another day, we cut the kid a break and packed up the campsite. My sister assured me that this was a passing phase. Her kids didn’t like to camp at Hank’s age; toddlers like routine. Meanwhile, Hank perched in his car seat with a matchbox truck and his sippey cup for nearly two hours while we packed. I have never seen him display such patience with anything that wasn’t shaped like a TV.

So, I’m crossing “Take Hank Camping” off my Mighty Life List. Next I think we’ll all go out to sushi and then head to the Opera. I’ll let you know how that goes.

I’m a little late posting this Momversation about finding time to read. Shortly after Hank was born, I realized that reading is my meditation. I get mean if I don’t get book time.

If you’d like to see more books I recommend, have a look at my Eight Books that Changed Things for Me post. The comments on that post are great too. If you haven’t yet, list your favorites here. I’m always looking for good reads.

Where should the kids go? It is perhaps none of my business. What I can say for sure is I’m sorry, and I wish them well.

Alice and Eden just launched a new project they’ve been working on for a while, Let’s Panic About Babies!

“You are hardly alone. If your friends and family arenâ€™t in your house, pointing out every hapless decision youâ€™re making, there are hundreds of strangers on the sidewalk with placards who are more than willing to leap into the fray. And for those times when you are utterly alone, you always have us, dear reader! We may not actually be physically present, but weâ€™re right here in this web site, laughing at youâ€”but quietly, so you canâ€™t hear. Thatâ€™s how much we want you to perceive that we care.”

Congratulations, ladies! It’s high time we had somewhere we could panic as a community.