Y’all. Paragliding is nothing like parasailing. They are so dissimilar, in fact, that the description on the parasailing Wikipedia page actually reads, “Parasailing is primarily a fun ride, not to be confused with paragliding [which is terrifying and will kill you dead.]” I teased out the subtext for you on that last bit. 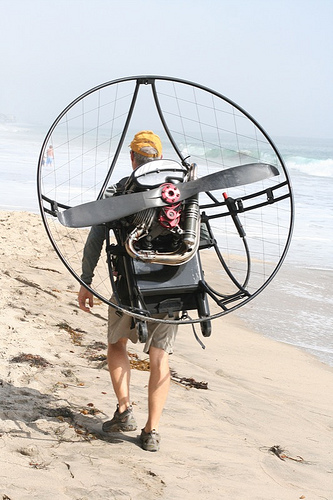 The paragliding we booked involves strapping yourself to an instructor who’s attached to what can only be described as a large fan. Then you run along the beach and lift off alarmingly high in the air. It’s like flying a helicopter without an actual helicopter around you, or skydiving without an airplane, or building a pair of wings from feather and wax and jumping off the roof of your apartment.

Nonetheless, we flew to LA to meet the paragliding guy on the beach. Between kayaking and zip-lining (which we’ll discuss in more detail soon), my adrenal system was rather taxed. My body wasn’t used to all this fight-or-flight action — the most my pulse usually quickens is when there’s a new episode of “So You Think You Can Dance” on the TiVo — so I was kind of a mess. 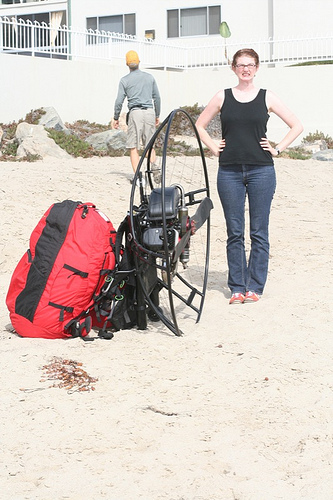 It was too foggy to take off from the beach, so we had to wait around while I pondered the intricacies of Fast Descents and In-Flight Wing Deflation with my head between my knees.

A pinhole of light came through the fog, so we helped our instructor tow his equipment out onto the beach, where we waited for a few more hours. Four stomach churning hours, while sorority girls made human pyramids in the sand next to us, and I looked around for a paper bag into which I could breathe. 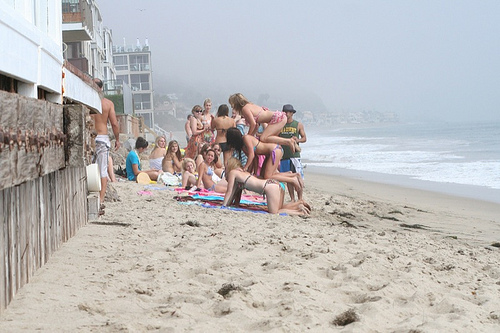 When the weather refused to cooperate, our instructor decided we’d just have to go up on the nearby hills and jump from there instead. I lifted my head from between my knees and threw Bryan a panic-stricken look. “Uh,” I said. “Um.” 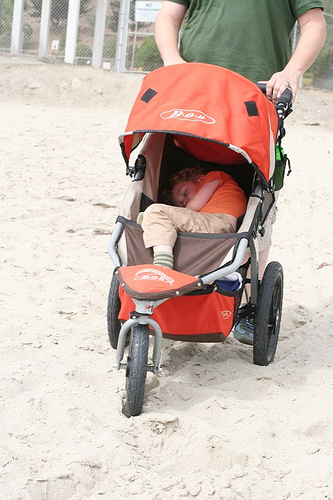 Jumping off a cliff strapped to a fan was so very far from my original goal of being swept up like a kite over the water that I could no longer squint and see the comparison. Jumping off a cliff was not on my effing list. My throat began to ache.

We walked over to the cars to prepare for our drive. “From where will we be jumping, exactly?” I asked. “The hills up there,” the instructor said.

The taste of tin filled my mouth. I blinked back tears.

“I’ve done it from there many more times than from the beach. Thousands of times.”

And so we drove to the hotel, where I wept with relief and disappointment at my failure to strap on a pair.

The next day I met Eden for breakfast. Later Rebecca, and I headed out for an enormous bowl of sweet potato fries. 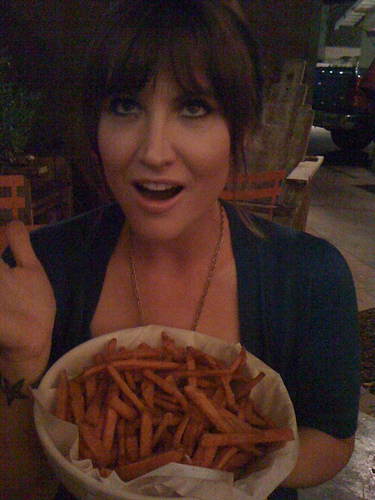 And several glasses of wine.

And after that I felt much better.

Intel is making my site more interesting by sponsoring my Mighty Life List. I’m learning my limits as we go along.

40 thoughts on “Paragliding is Not for Me”