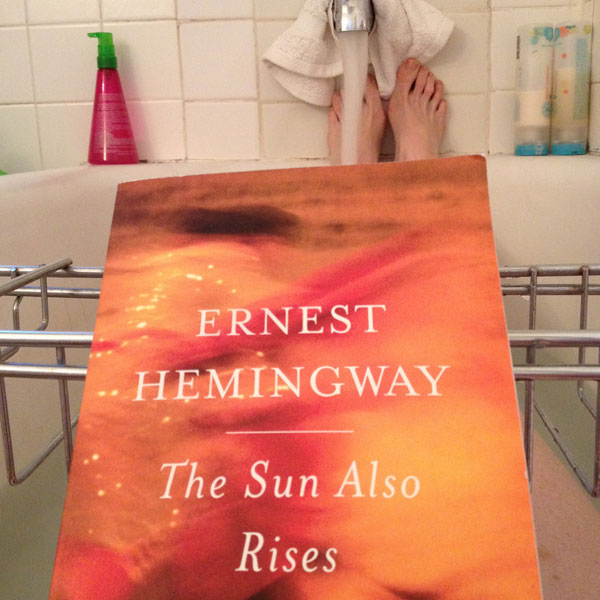 Oof. Now I have to read everything by Hemingway. The best parts of The Sun Also Rises:

As he had been thinking for months about leaving his wife and had not done it because it would be too cruel to deprive her of himself, her departure was a very healthful shock.

It is very important to discover graceful exits like that in the newspaper business, where it is such an important part of the ethics that you should never seem to be working.

After supper we went up-stairs and smoked and read in bed to keep warm. Once in the night I woke and heard the wind blowing. It felt good to be warm and in bed.

Brett was happy. Mike had a way of getting an intensity of feeling into shaking hands. Robert Cohn shook hands because we were back.

“Brett will tell you. She tells all the stories that reflect discredit on me.”

Walking across the square to the hotel everything looked new and changed. I had never seen the trees before. I had never see the flagpoles before, nor the front of the theater. It was all different. I felt as I felt once coming home from an out-of-town football game. I was carrying a suitcase with my football things in it, and I walked up the street from the station in the town I had lived in all my life and it was all new. They were raking the lawns and burning the leaves in the road, and I stopped for a long time and watched. It was all strange. Then I went on, and my feet seemed to be a long way off, and everything seemed to come from a long way off, and I could hear my feet walking a great distance away. I had been kicked in the head early in the time. It was like that crossing the square. It was like that going up the stairs in the hotel. Going up the stairs took a long time, and I had the feeling that I was carrying my suitcase.

Never once did he look up. He made it stronger that way, and did it for himself, too, as well as for her. Because he did not look up to ask if it pleased her he did it all for himself inside, and it strengthened him, and yet he did it for her, too. But he did not do it for her at any loss to himself. He gained by it all through the afternoon.

The three of us sat at the table, and it seemed as though about six people were missing.

“Tight!” Brett exclaimed. “You were blind!”

I said I would go with him, just to devil him.

“Bill’s a yell of laughter.”

“Oh, shove it along, Michael.”

quais – the area of a city (such as a harbor or dockyard) alongside a body of water
bateau mouche – a pleasure boat that takes sightseers on the Seine in Paris
darbs – 1920s, A person with ready money, who can always be relied upon to pay the check.
Mencken – American editor and critic. A founder and editor (1924-1933) of the American Mercury, he wrote socially critical essays, often directed toward the complacent middle class.
encierro – running of the bulls

6 thoughts on “The Sun Also Rises by Ernest Hemingway”